The String Quartet were recently hired to play for a wedding at the fantastic venue of Hever Castle near Edenbridge in Kent. 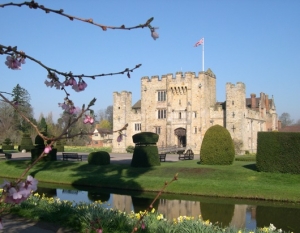 As there were not a huge number of guests the bride and groom had decided that a string trio would be perfect for the ceremony and drinks reception. We were located by the side of the ceremony room as it was a very open plan part of the castle and this worked really well as we could play as the guests assembled as well as being able to have a good view of the bride as she entered, made her way to the front and got settled. She had chosen a piece that we knew well but in an arrangement that we had not heard before – Scala and Kolacny’s version of U2’s With or Without You:

We were more than happy to add this to our pop arrangements for strings as we knew it would work beautifully for her entrance, creating a really emotional atmosphere.

The other pieces chosen for the ceremony were fairly new music to our repertoire but ones that work nicely, Coldplay Sky Full Of Stars and a favourite uplifting piece for the exit, One Day Like This by Elbow.

For the remainder of the booking we continued with our modern music for string quartet as the guests enjoyed drinks and canapes.

After the date we got a lovely message from the bride, always nice to hear we have added something to a very special day!! 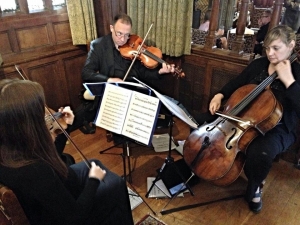 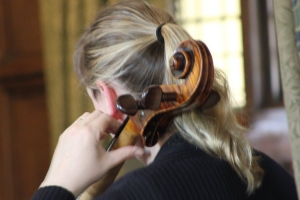 String Trio for a wedding in Groombridge Place

Premiere String Quartet were recently engaged to provide music for a wedding ceremony and reception in the beautiful surroundings of Groombridge Place, on the border of Kent and East Sussex. We are always pleased to perform at a venue local to us and as some of our members are based in Tunbridge Wells as well as London this venue is ideal for us to perform as a String Quartet, String Trio, String Duo or even a solo violin or cello!

The ceremony itself was held in the amazing Baronial Hall where we performed a selection of classical music for string quartet as the guests assembled.  The bride and groom’s choice of music worked really well for the ceremony, including Pachelbel Canon in D and the Flower Duet from Delibe’s “Lakme” (made famous by the British Airways advert). Often people want something upbeat for the exit but they asked for a more serene piece which worked beautifully – Haydn Serenade Op 3 No 5.

As the guests moved outside for drinks and canapes on the lawn we relocated to underneath the portico to entertain them with a mix of classical and lighter music, overlooking a couple of amazing vintage cars belonging to the relatives of the bride. After the guests returned to the Baronial Hall to continue the day we packed away and prepared for the 10 minute drive home – an unusual but welcome finish to the booking!